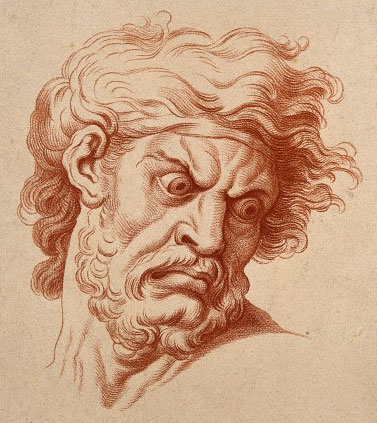 A couple of weeks ago I wrote about the causes of people acting like dicks. This is part two.

In Zen they say that anger is like a burning coal you hold in your hand getting ready to throw it at someone. You might well burn them, but who is it burning now? And the longer you hold onto it, the more you get burned.

Still, when you are angry, it’s all too easy to be a bit dickish. Because you aren’t thinking about how the other person would feel, and anyway, you actually want to hurt them. So you say things that would be hurtful if they were said it to you, and so on. At best you end up with hurt feelings and at worst, World War III.

Your workmate who forgot to give you a lift when your car was at the garage, and then phones up and apologizes. And your reaction is to say, “Thanks a lot, asshole. How am I going to get my car back? I need it tonight so saying you’ll take me to pick it up tomorrow is no effing use. You want to drive me to my Anger Management Meeting tonight?”

Now the thing is, he might have agreed to act as your chauffeur if you hadn’t been so nasty. But now he’s angry as well as embarrassed and you are just burned. Nothing good is coming out of this.

And he sure as heck isn’t going to loan you his power saw again.

And yes, I know, sometimes there are justifiable reasons for being angry. Angry about injustice. Angry about crime. Angry about people hurting children. But the funny thing is, people are very rarely dickish when they feel that kind of anger. Maybe it isn’t anger at all; maybe it’s something else. Righteous indignation. Because it’s unselfish anger.

The anger that makes us forget to do as we would be done by is all our own. Up close and personal. Selfish anger.

But the thing about that anger is, it doesn’t even have to be directed at the real source of the anger to cause dickishness.  When you are pissed off about something your boss said, you take it out on the girl giving you your latte. And of course, she thinks (quite rightly) that you are a jerk, and she gets angry too and….

Now, I have done it myself, but I was lucky because I recognized in time that I had been a dick. Here’s the story.

I was walking to work one summer Monday back in 1967. Yeah. Back then. And to be perfectly honest, I was a hippy in that Summer of Love, but an unhappy hippy. The previous Friday I had been beaten up by some thug because he didn’t like my long hair and bare feet. So as I was limping along the side of the road, I felt somewhat aggrieved. And then a car drove past on the other side of the road, and the driver yelled something obscene out the window at me, so I played cowboy and did a double slap draw flipping him the bird two handed.

And the car stopped.

And this hurkin’ high school football player got out and started walking toward me.

Now a fair question right now is, who was being a dick?

But a better question might be, how is me being a dick now going to make anything better?

Here’s the thing. I could hold onto my anger at the idiot who had beaten me up on Friday, and get the crap kicked out of me again, or I could recognize that this guy, even though he was being a jerk too, wasn’t the reason I was angry. So being rude to him wasn’t going to help anything. It certainly wasn’t going to improve my health. So, I did what I wanted him to do. As he got close enough to hear me, I put up my hands in a kind of “I surrender” position and said, “I’m sorry, I shouldn’t have done that.” Guy stops dead in his tracks and looks at me. “That was rude of me and I apologize,” I continued as he deflates like a punctured balloon, “I had a shitty weekend, and I’m going to be late for work, but that’s no excuse. Not your fault.”

He looks at me and shuffles his feet and glances back at his car… “Uh.. yeah. Erm… well.. You English?”

“Yeah, well…. We got a lot of these hippy types… erm… (mumble mumble). He stops and gives me a kind of half wave. “Have a nice day.”

I’ve thought about this a lot since then. I admit I’m kind of proud that I got out of it with a whole skin. That I used a little bit of simple behaviorist psychology to save my neck. But much more than that, I remember it as an example of the power of “Do as you would be done by,” even if you are fuming.