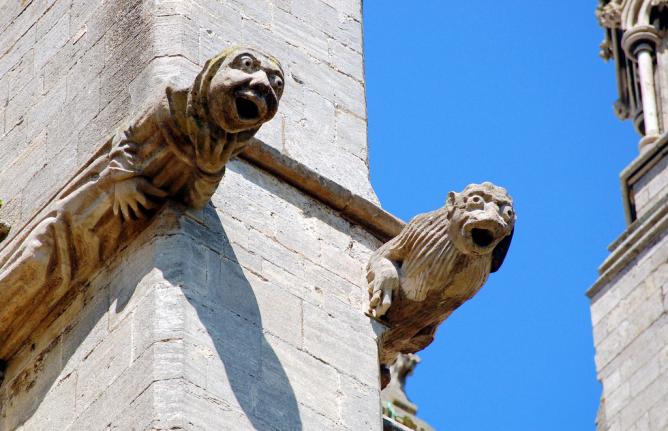 Last time, I talked about my friend John and the idea of friendship and the nature of belief.

Because believing in something is different from knowing something. As John and I sat talking I knew I had a glass of beer in front of me. I also knew that John was my friend. But this knowledge was predicated on the belief that friendship exists. Because, other than our experience of friendship, there is no way to prove it exists. And in fact, as an object, a thing of atoms and mass, friendship doesn’t exist. It only exists in our minds, or in our hearts, if you will.

Now for John, there was a time when Friendship, as a concept, didn’t exist. He hadn’t really experienced it, so he didn’t believe in it. It took a “Leap of Faith” for John to accept that the bunch of writers, musicians and artists in our D&D group could be his friends. Because, since you can’t see it, or taste it, or smell it; you can’t measure it, or weigh it, or touch it, there is only one way to prove the existence of friendship: by being someone’s friend. You have to live it. You have to believe in it.

There are many intangibles like friendship that we take for granted in our lives.

Do you believe in Good and Evil? Or maybe their more common form, Right and Wrong?

Do you believe in Society?

Do you believe in Democracy?

Do you believe in the Law?

The fact is, I was drinking beer. The truth is, John is my friend. I can show you a photo of the beer glass. I can’t record my friendship in any way, except here, by telling you about it.

I can prove a fact. I can’t always prove the truth.

The trouble is, people today confuse the truth with facts. They think because they believe that something is true, that makes it a fact.

Do you believe that the United States is the greatest country in the world? Because that is a matter of belief, of opinion, possibly of faith, not of fact. By many standards, the US is far from the best. Infant mortality? Way too high. Inequality? We’re not all that hot. Standard of living? Depends on who you are. Freedom? Now there’s really a question.

Let’s take the matter of Law. Now laws are things that exist but have no physical being, which is to say they aren’t real. They are conventions, agreements, standards, sets of rules, if you will, but they aren’t real in the way that a glass of beer or a bullet is real.

Which means that like friendship, the law can exist only to the extent that we agree that it exists. And the only way that we can understand this thing called law is by our experience of it. And like friendship, how you experience the law depends a lot on who you are.

And since, like friendship, the law only exists to the degree that we experience it, for some people in this country, we don’t have a legal system, we have a privilege system. And whether you believe in the law or not kind of depends on how you live it. Like friendship.

How about education? Oh, we have schools, alright. You can prove that. Schools are facts. Education is an opinion. And once again, whether you have an education or not depends on your experience of what happens in the school. And that depends on a lot of things too. Like where you live. What your religion is. What your skin color is. What gender you are.

I frequently say that the most important things in our lives, the things like friendship, and society, and love and trust are the intangibles. The things that only exist because we believe in them. Because they make all the other things, the tangibles, possible.

And you can’t believe in justice and not grant that justice to everyone.

OK, let’s say justice is a little complicated! How about fairness? That doesn’t exist either, unless you practice it. And you can’t be fair to half the population and not the other half. Because half-fairness is unfairness. Half justice is no justice. Half equality is inequality.

What makes our lives worth living, what makes our lives possible, are these intangibles, these all-important myths that we pretend are real. These truths that we hold to be self-evident. If we don’t have them, we have nothing. But we only have them if we believe in them and live them. Pretending doesn’t cut it. You can’t say you believe in friendship and act like a dick to your friends. You can’t say you believe in fairness and rip people off.

You can’t say you are a Christian, and then break every teaching your Bible gives you.

You can’t say you believe in justice, and then deny justice to someone because of their sex, or religion, or where they were born.

Justice doesn’t exist except in the act of justice.

Kindness doesn’t exist except in the act of kindness.

Love doesn’t exist except in the act of love.

Believe it or not.